Pokemon is a series of monster-raising games. The mainline games have you playing as a young trainer who is just setting out on their Pokemon journey and aspires to become Pokemon master by beating the Pokemon League. 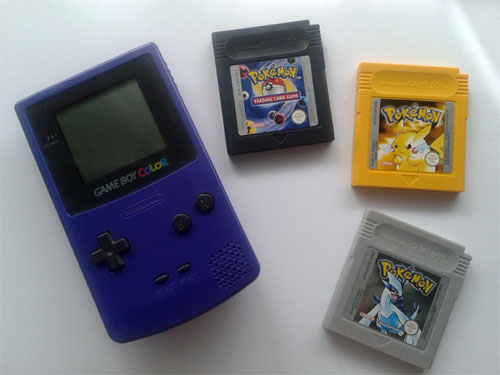 This game is basically the Pokemon trading card game base sets in video game form. You play as a trainer on a quest to beat the Pokemon TCG league. The game received a Japan-only sequel that among other things features more cards, a more in-depth story and larger in-game world.

While it's set in the Kanto region as well, this version has some important differences from the preceding games, Pokemon Red and Blue. Your starter is a Pikachu who follows you and who you can talk to, and there are several nods to the pokemon anime in the game. For instance, your rival Gary now has an eevee as his starter Pokemon. The game contains a glitch that actually allows you to catch Mew. That being said, I've always had a fondness for elaborate fake descriptions of how to catch Mew in Red and Blue.

Yellow also has the bonus of an adorable intro:

Kicking off the second generation of Pokemon, the Silver version has Lugia as its titular legendary (the Gold version featuring Ho-Oh).

Along with more Pokemon to collect, the game brought other new features to the table. The Pokegear enabled the player to listen to the radio, exchange numbers with other trainers who occasionally could request a rematch, and other things. After making enough progress the player is also able to travel to Kanto to challenge the eight gyms in the region.

The intro predominantly emphasizes Pokemon in their natural habitats:

Some of Ruby/Sapphire's notable features are secret bases, which you can build in various spots around the game world and decorate. The spots range from easily accessible to requiring a specific bike and HMs, taking considerable effort to access. Exchanging data with another player allows you to visit their secret base.

Another major feature are Pokemon contests. In these contests trainers enter their Pokemon to impress a panel of judges. Pokemon can compete in several categories and have to use moves suiting the theme of the contest. Moves can also affect the competition, such as changing the turn order, so trainers have to use them strategically in order to win higher-rank contests.

Diving was also introduced, allowing the player to explore underwater. At certain points in the story, diving was required to progress.

A major feature of this release is that players are able to customize their trainer. A variety of items are available for dressing up, and eye color and hairstyle are selectable. It also introduces the fairy type, and contains a fairytale-themed town that is expectedly adorable.

The game retains the customization feature introduced in X and Y. Instead of gyms the player participates in trials this time around. Some moments are quite amusing.

Rather than relying on HMs for things like flying, the game features a system where the player is able to ride different Pokemon depending on their needs. For example, a Charizard will transport them to previously visited locations.

Pokemon teams created according to various concepts. The picks are made based off Pokedex entries and I try to keep comments in line with those (some speculation occurs).

Concept: A Pokemon team that could conceivably be used to render anesthesia care.

Concept: A Halloween team where half the Pokemon are dedicated to "trick" and the other half to "treat".